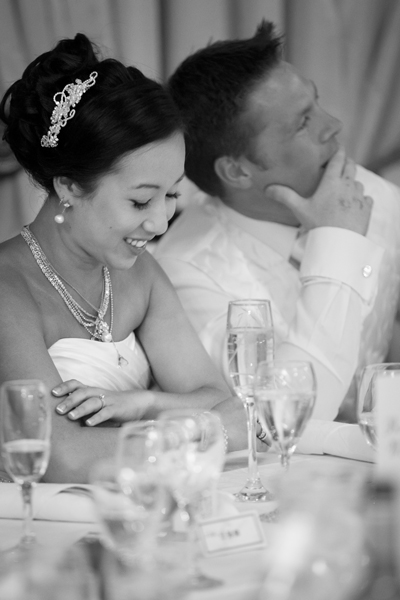 The best man’s speech is usually the highlight of the party. It’s a chance to lighten the proceedings and sprinkle the emotional groom’s and bride’s speeches with a bit of clean scandal. It does, however, have the potential to be cringingly awkward. If all you’re hearing is the scraping of silverware against crockery instead of laughter, you’re doing it wrong!

Don’t leave the preparations to the last minute. Take the time to hone the speech down to a fine art. Perform it in front of a mirror to iron out any nervous facial tics you may have. Brevity is the soul of wit, as Shakespeare once wrote. Keep your speech concise and sharp – don’t lecture the guests. If you do, you’ll run the risk of having the elderly guests fall asleep in the salmon terrine.

Steer clear of the open bar before the speech. Many a best man has fallen foul of the “Dutch courage” system of speech-making and ended up a wobbly mess on stage. Slurry speeches ridden with expletives are far from palatable. Be classy.

Tell funny stories. That’s the best man’s job, after all! However, avoid anything that might embarrass the couple excessively. Anecdotes pertaining to ex-girlfriends, for instance, are strictly taboo. Lay off any crass stories that’ll result in any excessive pearl-clutching. Your responsibility is to honour the couple, not to humiliate them. Rather, stick to stories that bring out the best in the bride and groom. Reveal your first impressions of them as a couple. Highlight certain characteristics and personality traits in each of them that are meaningful to you.

Remember, it’s not the Best Man Show. Don’t hog the limelight and turn the speech into a stand-up comedy routine. Rather, direct the attention to the bride and groom. Deliver the speech and wrap it up as soon as you can. It’s a good idea to conclude the speech with a toast, and resounding congratulations from you and the rest of the guests.